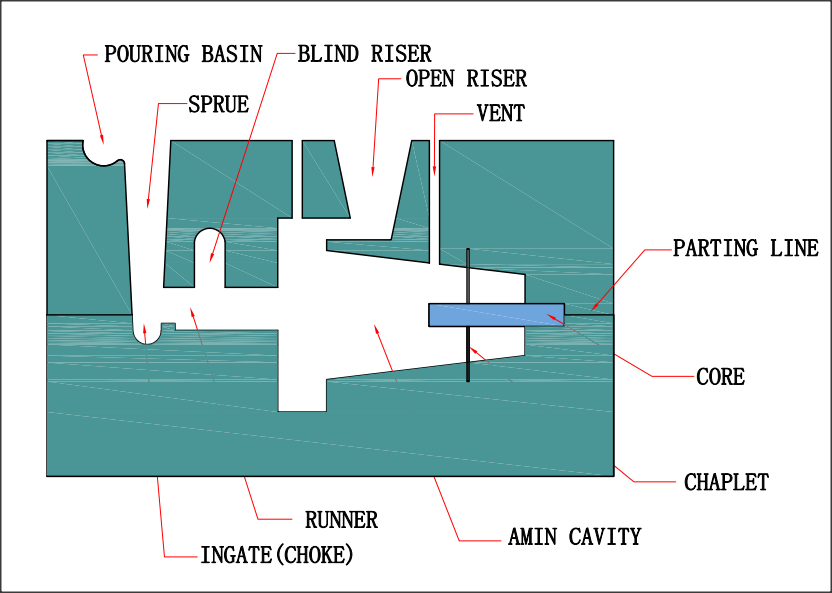 Molten metal is poured into already prepared mold through a gating system.

The gating system designed for a casting is informed by the weight of the casting.

There are a number of parts that make up the gating system.

1.  Pouring basin is a reservoir at the top of the gating system that receives the stream of molten metal  poured from the ladle.

2. Next to the pouring basin is the sprue which usually tapers down to the sprue base well.

3. The choke informs what the cross sectional areas of the runner bar and ingates will be by employing the gating ratios.

4.The runners and ingates convey the molten metal to the cavity of the mold. Riser is an important part of    the  gating system. It  include open riser and blind riser.

Its function is to feed the casting during solidification so that no shrinkage cavities are formed.

5.Cores are used in casting involving internal cavities or passages. The core allows for the formation of an  interior surface to a casting. It is removed from the finished product before the cast is further processed.

6.A vent in the mold is designed to allow gas formed by a reaction of the molten metal hitting the sand.   Any air  that is in the mold at the time of pouring will also escape form vents.The vent usually used ceramic tube or paper tube .